A wealthy American entrepreneur, Cyrus West Field (1819-1892), dared to dream of creating a Transatlantic Telegraph Cable between the United States and Europe. Since the first successful commercial cable between Dover and Calais in 1851, submarine telegraph cables were being laid with increasing frequency, but over relatively short distances.

From 1854, he was inspired by the idea of enabling communication between the continents in minutes, instead of 10 days or more. No-one could have anticipated that it would take twelve years for the dream to be realised, hampered by technical and financial problems and postponed due to the American Civil War of 1861-5.

Laying a cable across the vast distance of the north Atlantic Ocean sea-bed, seemed an impossible challenge. However, Field’s conviction and perseverance reflected that pioneering attitude of the Victorian era, and the project captured the imagination of all, on both sides of the Atlantic. Many eminent and influential people in finance, politics, science and industry were involved as were skilled engineers, ship-builders and the Maritime service. Samuel Morse, William Thompson (Lord Kelvin), Samuel Canning, Captain James Anderson were but a few of the leading figures committed to the enterprise.

Other Birmingham companies were also involved with this project, with the design of the cable by John & Edwin Wright, rope makers of Birmingham. Under licence, the cable was largely manufactured in Greenwich by the Telegraph Construction & Maintenance Co. (a merger of Glass, Elliot & Co. and The Gutta Percha Co.).

All did not run smoothly, and the attempt of 1857 failed and then the 1858 cable ceased to work after only a couple of weeks. The problem, a more substantial armouring layer was necessary; one that could withstand the rigours of a 2000-mile Atlantic crossing.

James Horsfall had already transformed the wire-drawing industry with his patented heat process and Baron Dickinson Webster had seen the potential for their wire in the developing field of submarine telegraphy, of how their wire could help solve the problems the industry was having. Sadly, Baron did not live to see how much the company would be involved and James was left to carry on with the project alone.

Making the Wire at Hay Mills

In 1865 at the Hay Mills Works, James rose to the challenge of manufacturing 1600 tons (approx. 30.000 miles) of .095” wire. This was more than double the normal output, with maximum output for 1864 at 400 tons. It would take 250 men, eleven months to complete, in the specially enlarged ‘Atlantic Shed’. This enormous brick-built structure took just two months to complete and it stood and was in use for nearly 160 years, being demolished in 2019.

The armouring wire was crucial to the project as it had to possess the strength, ductility and durability to withstand the rigours of the laying process and protect the twenty-five miles of shore section. The pressure on the workforce was immense, and it reputed that James Horsfall had beer brought into his works from the local alehouse to keep his work force at their machines

The Birmingham Gazette (6 June 1865) reported that ‘workmen are engaged all night and all day’ in preparing ‘many thousands of tons of wire to be used in preparation of the great Atlantic telegraph cable’. The Atlantic Shed was referred to as the ‘drawing room’ and described as:

‘… black, gloomy and dismal, with benches running around and across it in every   direction. In one corner is a gigantic water wheel, often used to reinforce the steam engines, and hard by are a number of tanks where the wire is “cleaned” by being made more dirty. Near these are rows of great boilers …’

It went on to describe some of the drawing process and how that day, part of the order was being sent out for delivery:

‘… thirty tons in five hundred and eighty-one bundles- all stowed away in thirteen  wagons, amidst the cheers of the assembled workmen, the cavalcade sets out – passes along the Coventry Road to Mr Horsfall’s town office in Dean Street, across the Bull Ring and by the way of Moor Street, Carrs Lane and High Street to New street, where at length it reached the Town Hall, and the wagons parted company each to find the nearest way to the stations of their respective companies.’

Eight of the wagons belonged to the Great Western Railway, four to the Midland Railway and one was the works own. Each wagon was drawn by a pair of horses ‘ornamented with many coloured ribbons and flowers’; surely a spectacle to be seen in the town.

On 15 July 1865, Brunel’s Great Eastern set off from Valentia, Ireland, heading for Heart’s Content, Newfoundland. Depth soundings of the ocean bed had been made in 1857, using wire also manufactured by Webster & Horsfall. The cable broke and sank almost 800 miles from Heart’s Content. The voyage was abandoned but was resumed the following year as Cyrus Field was undaunted and immediately placed a repeat order for the armouring wire with Webster and Horsfall.

On the 13 July 1866, the Great Eastern, commanded by Captain James Anderson, again departed from Valentia for Newfoundland. On the 27 July, the telegraphic cable, 1852 miles in length, was landed at Heart’s Content, with much celebration on both sides of the Atlantic. 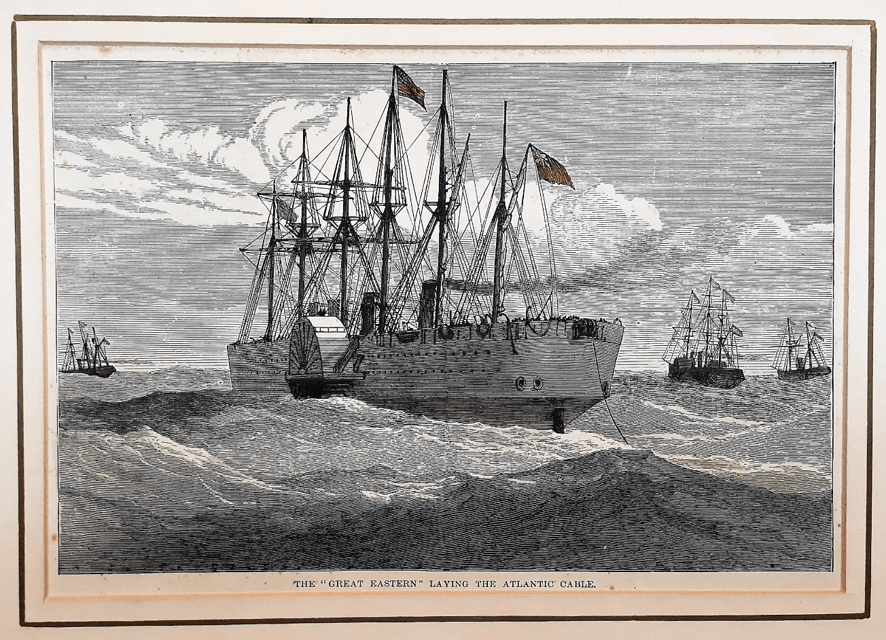 Following this, the Great Eastern set off to recover and complete the 1865 cable. This voyage was also successful, resulting in two transatlantic cables, operational until 1872. Here again, the wire produced at Hay Mills would prove crucial, as the only wire strong enough to be used for the grappling rope made to lift the broken section of the 1865 cable from the ocean floor. 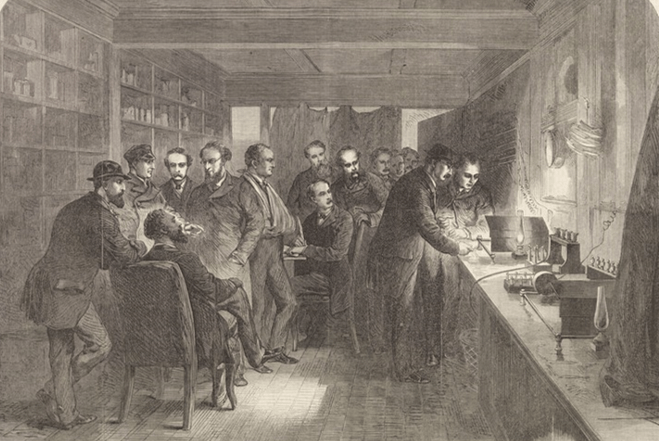 James Horsfall received the news of its success the same day at his home in Moseley, a communication which a day before may have taken up to two weeks to reach him. 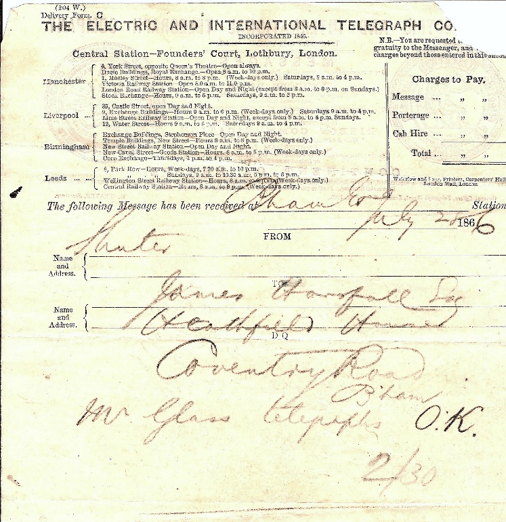 The possibilities were endless; closer links between Great Britain and the United States, had major impacts on financial, industrial, commercial, social and news organisations on both sides of the Atlantic. Indeed, they would herald the steady development of a global network of submarine telegraph cables.

The laying of TAT-1 (Transatlantic No.1), the first submarine transatlantic telephone cable 1955/56, heralded a new era of communication.  Further advances have led to the introduction of fibre-optic cables, a technology enabling high-speed use of the internet and telephone.

Despite the positive impact and financial rewards from telegraphy, James Horsfall did not continue manufacturing cable wire, but instead applied his expertise and business acumen to other products. However, James Horsfall with his patent, Baron Dickinson Webster with his vision and the hard toil of Webster and Horsfall employees of 1865-6 have their place in history of communications technology, in that great pioneering age, when anything was considered possible. 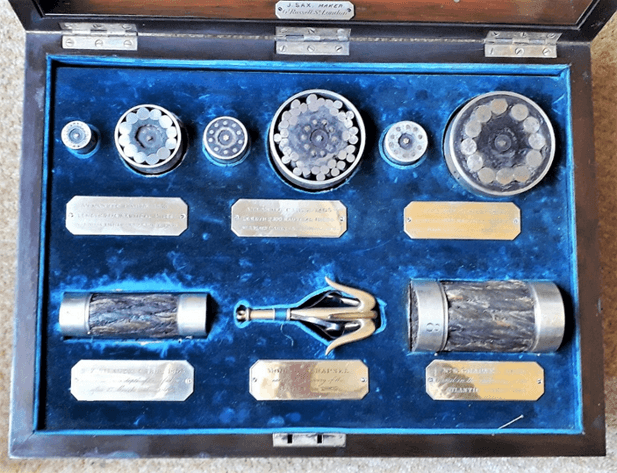 Webster and Horsfall presentation case, showing samples of the 1858, 1865 and 1866 cables, including a scaled-down replica of the grappling hook successfully used to retrieve the 1865 cable.

The Webster and Horsfall archive, now in the care of Archives and Collections at the Library of Birmingham contains a complete record of the company’s involvement in this project. The display case shown here still takes pride of place in the Board Room at Hay Mills.

(Acknowledgement to Clio Small, Hay Mills Foundation Trust volunteer, for her research and contribution to text).